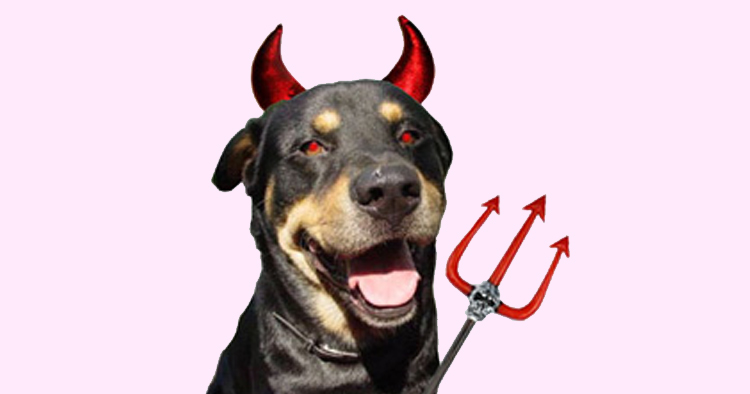 The idea of tough-dogs is a fluid concept and the breed du jour has varied with the era.

When I was growing up, it was definitely German-Shepherds, then Dobermans. By 1976 this identity had been grafted onto Rotweilers, probably by people who had seen the demonic dog in the first Omen film. By the mid-80s, gangs in blighted urban America were using pit-bull types for security purposes, and for the first time a breed’s reputation equated pretty directly with its majority use.

The UK government is considering a revisit of dog control legislation. The last law, the Dangerous Dogs Act of 1991, is controversial and considered by many to have been a knee-jerk reaction by a parliament whose members were scared of looking insipid prior to an election.

The new proposals from DEFRA contain several measures, some of which I think are quite good, and one of which is just daft.

Firstly, it recommends that dogs are microchipped.

A quick call to my local vet revealed that in my area around fifty percent of dogs at that practice are microchipped already, This procedure costs a very reasonable £25, and you’d think it would be a tolerable compulsory overhead.

The government would also like to have compulsory third-party insurance.

So I called Pet Protect, one of the market leaders, and was quoted £253 per annum to insure a five year old male cross-breed.

This part of the recommendations has provoked hyperventillation in some areas of the media. However, that £253 is mainly medical coverage for the dog. When I asked them to decouple the third party element, I was told I couldn’t, but that it represented just 3% of the total premium – £7.59 per year.

Microchipping and medical insurance, it strikes me, are both of primary benefit to the dog – which is OK if you’re a responsible dog owner. If you can’t afford £4.87 per week to insure your dog, you can’t afford the thousands it could cost for a chronic condition, or even the hundreds for, say, a broken leg.

So third party insurance. Just how likely are you to be attacked by a dog anyway? Well, there’s a problem with the figures.

But that phrase – bitten or struck – shows a deficiency in the way the stats are collected.

A dog bite is pretty quantifiable. There are probably a few accidental bites, but not many. A dog strike is a different thing entirely. If your labrador is so delighted to see you that he jumps up and causes you to bang your head on the kitchen unit – that’s a dog strike.

Conflating these things can’t be helpful.

As well as illustrating that reports of dog bites and strikes have gone up the HOS information also reveals some other interesting demography. The injury rate to male humans is roughly double or more than that to female humans. (This gender difference peaks between the ages of ten and fortyish).

And the chance of your being attacked by a dog are inversely proportional to your age. So as a 15-19 year old male youth, you are roughly four times more likely to experience an incident than a 75-79 year old man.

I’d be interested to index these figures with dog ownership. Perhaps teenage males are four times more likely to own a dog than retirement age men. But that’s probably not the case. Probably, young males are simply more likely to act like twerps around dogs, or to associate with breeds of dog they consider to be tough and thereby provoke the problematic behaviour.

In fact the relationship between perceived dog aggression and breed may be counterintuitive. According to ‘Breed Differences in Canine Aggression’ by Duffy, Hsu and Serpell (2008), the most dangerous dog breed is – wait for it – the sausage dog … followed by the Chihuahua and the Jack Russell. These breeds are snappy in several contexts: with their owners, with strangers and with other dogs.

In relation to pit bulls, the report points out that the attack:

“… pattern is consistent with the view that this breed has been selectively bred for aggression toward other dogs rather than humans”.

The problem with pit bulls is that their physiology means that an incident is more likely to involve significant injury. In fact, traditional ideas about large dogs and aggression may well be skewed towards indicting big dogs because their bites are more likely to require medical attention and therefore to be reported.

Another recommendation by DEFRA is that prospective dog owners should be required to take a test.

Wouldn’t this be great if it did what it said in the tin? However, you only have to look at driving to realise that intention does not automatically create outcome. It’s my guess that everybody who gets a dog already knows they’re supposed to get it micro-chipped and walk it a couple of miles each day.

There’s no guarantee that the person who takes the test will even be the dog’s primary custodian. If you get the swottiest member of your family to take the exam, and then leave your pit-bull puppy in the wrong company. Well you don’t need a crystal ball.

I think the figures show that with both driving and dogs, the problems peak in young men. It’s not the tests – it’s the testosterone.

The fact is, if you’re worried about being physically attacked, you should be on the alert for young men of around 17 years old. According to the Office for National Statistics, in 2006, there were just over eighty thousand convictions or cautions for violence against the person in England and Wales. The majority of offenders were male (80%) and the offending rate peaked at age 17.

One of the most vociferous groups in relation to changes in dog control is the Communication Workers Union, who represent postal workers. They seem to have a valid point: at the moment, dogs are required to be under control in public places, but private places like homes and gardens are different.

The new proposals therefore include provision for a dog ASBO – a so called dogbo – and hopefully this would help to catch the animals who are really causing the contemporary problems: injuries to strangers on domestic property and injuries to young family members.

Ultimately, I think we all know what the real issue is. Some people don’t want a fuzzy friend, they want a status animal. Dog mismanagement is most likely to occur with the combination of dogs perceived to be ‘tough’ and young men. Unfortunately, it isn’t possible to legislate for either attitude or age.

The major worry about the new legislation is that, the already conscientious would be targeted because they’re easy.

This situation must surely have been exacerbated by the fact that the government has violated an unwritten covenant with its citizens in such areas as motoring infringements which have come to be a kind of informal taxation. Will dog laws end up doing the same?

Published in the Telegraph this week, three small dogs intimidate passers-by on a street in Jindong, China. No-one could get near to help their drunken, unconscious owner, including police and ambulance teams. Who needs a pit-bull anyway?