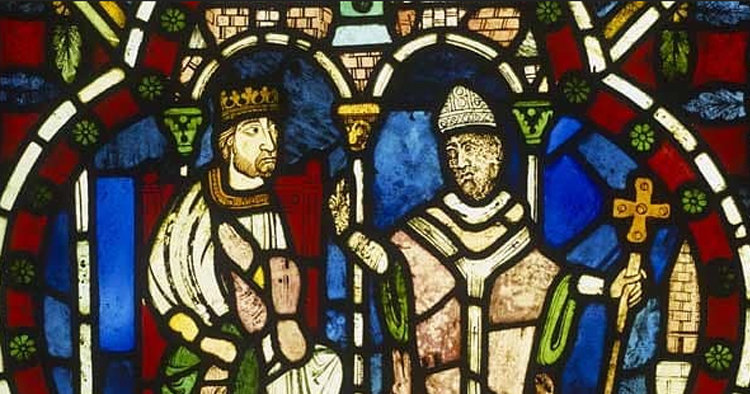 Henry II was regrettably given to childish tantrums during which his “grey eyes that glowed fiercely … grew bloodshot in anger”. He also fell to the floor and chewed straw.

Perhaps it wasn’t just emotional incontinence. He kept a large empire together in difficult times, expanded and, in many ways, improved it. It may not have been bad psychology for the people around him to fear his wrath.

Whether the rage was real, Henry’s contribution to normalising and centralising the law of his kingdom cannot be doubted. He energetically travelled miles to supervise legal proceedings, championed the use of juries and established the Royal Magistrate Courts. He also oversaw the decline in the outmoded use of trials by ordeal and combat.

One of the key themes of Henry’s legal efforts was the restrictions of the rights and privileges of the clergy and of Rome. Like a slowly rising dough, the Church tended to expand inconspicuously into all vacant crevices and proved remarkably intractable once it got into them.

However, an attempt to deal with ‘crimonous clerks’ in the form of the ‘Constitutions of Clarendon’ of 1164 proved all too much for Thomas Becket, who objected to the King’s intention to try clergy for common crimes once they had been defrocked in an ecclesiastical court.

Beckett’s issue was with ‘double jeopardy’ – the intrinsic injustice of being tried twice for the same crime. This, of course, could have been solved by just allowing the secular courts a judicial monopoly, but it’s not an abandonment of privilege that Beckett or the Vatican would have stomached.

Henry’s big issue was that there was a two tier system of justice: one for the clergy and one for the laity. Henry’s motivation may have been the issues of fairness or of jurisdiction – it was more probably jurisdiction.

But the ‘fairness’ part really resonates with most moderns. Since this justice system systematically dispensed milder punishments to the ecclesiasts, it was unfair.

At the very beginnings of Christianity, the persecuted minority were theoretically subject to the laws of the Roman Empire in which they lived, yet St Paul seems to reserve the right of the Church to judge its own:

“Dare any of you, having a matter against another, go to the law before the unjust, and not before the saints?”
1 Corinthians 6:1

The establishment of the Church within the Roman Empire under Constantine rendered this less of a dichotomous situation, but tension between the legal rights and jurisdictions of States and the Church have continued.

Popes reiterated their hegemony over justice to clerics. Innocent III maintained that even where the parties – clerical and civil – were both amenable to secular authority, that the ecclesiastical privilege could not be forfeited. It was a right of the whole Church body, not the right of an individual churchman to renounce.

The Catholic Encyclopedia phrases it thus:

“Likewise, not all persons are to be judged by secular courts. The Church could not permit her clergy to be judged by laymen; it would be utterly unbecoming for persons of superior dignity to submit themselves to their inferiors for judgment.”

Eventually, the term ‘benefit of clergy’ became elasticated to include everybody – non-clergy and women too. It was, in effect, a way of getting a more lenient sentence for your first offence. We do similar things today, in the recognition that a first-time offender has the capacity to change and improve.

And a glance at European history tells us that the practice of two separate strands of law, one for the laity and one for the clergy, has been dissolving to the point that it had been imperceptible in modernity. A blizzard of changes has created a world where, one hopes, a priest could find himself in a secular court for burglary, driving while drunk or (eventually) failing to pay the HP agreement on his stereo.

But what about child rape?

The arguments for and against ‘Crimen sollicitationis’ of 1962 have, in the last few weeks, been used by both sides of the child abuse scandal in the Catholic Church.

Defenders say it is a way of protecting the privacy of alleged perpetrators, victims and witnesses before the establishment of guilt or innocence. It does not preclude the surrender of the perpetrator to secular justice.

Others, like Father Tom Doyle, canon lawyer and ex Vatican employee says it is:

The personal role of Josef Ratzinger, in particular, has come in for a great deal of scrutiny. Should he be investigated as complicit in crimes against children? Or even be given or denied immunity as a Head of State?

For me, the most interesting parts of the child abuse affair are the cultural attitudes that I see leaking out from around the edges of the public responses and behaviours of the Church, the kind of reflexes which betray more of the subconscious of the entity than its analytical output.

We are left with the suspicion that the Church has felt, on more than one occasion, that she could ‘take care of her own’. This could be an edict from the highest, or an oft repeated behaviour from lower down; it could derive from a conviction that the Church is a self-contained magesterium of its own or be just a matter of PR expediency.

Whichever is the case, the fact is that instances of abuse have been ‘occult’ – hidden. It has exploded like a bloated corpse – well after the rot had set in. That’s a mistake for which the dioceses of Wisconsin and Chicago are paying financially, and the wider Church will continue to pay in loss of respect.

It reveals a Church at odds with the rest of us – we who thought that the days of priests getting away with lighter penalties in ecclesiastical courts had melted away with the Black Death and tithes.

Bunny in the Headlines

It’s incredibly anti-modern. If the Church appears to be caught like a bunny in the headlights (or should that be headlines?), it may be because it is struggling with a cultural norm which prevails within it but not without.

I also doubt that that the Church will own that its own peculiar attitude to sex may have contributed to the behaviour or selection of some of its priests. In an ad in the New York Times, Bill Donohue, the Catholic League President said:

“The Times continues to editorialize about the ‘pedophilia crisis,’ when all along it’s been a homosexual crisis. Eighty percent of the victims of priestly sexual abuse are male and most of them are post-pubescent. While homosexuality does not cause predatory behavior, and most gay priests are not molesters, most of the molesters have been gay.”
(Cited by Maureen Dowd)

It would be good to know where Donohue gets his figures from, especially since his attempt at a snow job conflates two very different sexual behaviours – one of them legal, consensual and between adults.

Actually, it would be nice to know a lot about the sexual attitudes and behaviours of priests so that we can get an empirical picture.

Perhaps Catholic priests are more likely than average to be homosexual and enter the priesthood as a rejection of their sexuality; perhaps more pederasts enter the priesthood because of the opportunities for intimacy which such a profession affords; perhaps there is no difference whatsoever between an average groups of Catholic priests and the lay population in their sexual preferences.

The point is we’re unlikely to ever know because of the Church’s strange attitude to this, one of our most basic human functions.

It is a great shame that Rowan Williams has today offered an apology for saying that the Church in Ireland has lost all credibility in the way it has handled the issue of paedophile priests. I don’t know what pressure he has been under, and from whom, but it was a mild statement, considering.

The only sensible way forward is for the Vatican to make perfectly clear that it regards the idea of Benefit of Clergy in the same way that the rest of us do – as a fascinating entry in a history book.

As Father Tom Doyle put it:

“Cardinal Ratzinger, now as Pope, could tomorrow get up and say: ‘Here’s the policy: full disclosure to the civil authorities, absolute isolation and dismissal of any accused and proven and convicted clerics, complete openness and transparency, complete openness of all financial situations, stop all barriers to the legal process and completely co-operate with the civil authorities everywhere”

So why the delay?