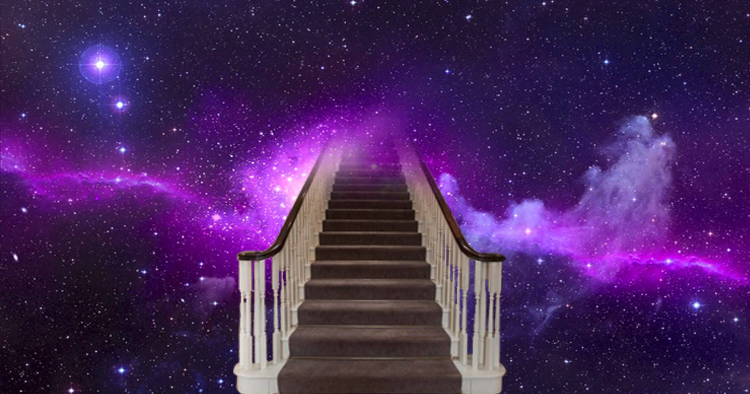 It’s like a theme-park with psychic powers – wish it, and it will be so.

Lucidity has traditionally been so strongly associated with either hedonism or exotic spiritual practices that its scientific significance has been a little underplayed. In addition, the Freudian-inspired psychodynamic model which was influential for so much of the twentieth century created suspicion of anything which interfered in the dreamstate; it was regarded as a critical and sensitive interplay between the putative parts of the personality. Intervening would have been regarded as sensible as letting off a firecracker behind your mechanic while he’s fixing your brakes.

But the humanistic schools of psychology allowed for a less prescriptive and more evidence-based approach to psychology. Many have done their bit for oneirology (yes, it’s got an important-sounding title of its own). Stephen LaBerge has made a very respectable academic career of studying lucidity building on the work of Paul Tholey among others, and Susan Blackmore has done a great deal for the study of alternate mind states in general.

In addition, brain imaging techniques have allowed us to examine the neural correlates of all sorts of subjective states, lucidity among them. So now we can be reasonably sure that lucidity is a unique brain state, and not just a few people fibbing that they can do cool things while everybody else is just unconscious.

Secondary consciousness is thought to be limited to humans and has been difficult to pin down in a neuroscience-type way. However some liken regular dreams to primary consciousness. This means that measuring the difference between primary (normal) dreams’ and secondary (lucid) dreams’ neural activity could give meaningful data, free of the confounding variables which plague waking investigations into the same phenomenon.

The differences observed between normal dreaming and lucid dreaming included a 40Hz brainwave in the frontal regions and greater synchronised activity between the frontal and parietal regions. There may also be raised activity in a small part of the frontal lobes – the dorsolateral prefrontal cortex – but that research is still being peer-reviewed.

None of this answers that enduring question: how does brain activity give rise to subjective experience of consciousness? It’s the trickiest question in neuroscience.

But some hope that the understanding of consciousness may help in the design of interventions for those with altered versions of it, such as people suffering from schizophrenia. This understanding of the brain regions that need to be subdued and those that need to be boosted may ultimately lead to a treatment approach, claims Ursula Voss, University of Frankfurt, in the article.

TIPS from the COAL FACE

The New Scientist article is clearly written by a good technical reporter who’s never seen the state from the inside, apart from one fleeting moment after training. As such, the tips for attaining lucidity good do with some beefing up.

So if you want to try lucidity, here is my Mark II checklist. This is far from exhaustive, but it’s a good start.

For example, I score well on spatial awareness tests. I’ve been vaguely obsessed with how buildings go together since I was a child, and it turns out I do this in my dreams too. But it’s something I wouldn’t have noticed unless I had written it down in a dream diary.

If I find myself wondering if the first-floor balcony projects too far over the ground floor curtain wall, or whether the stairs have had one or two ninety degree turns, chances are I’m dreaming. When you become aware you’re dreaming – that’s lucidity.

This technique is really only a kind of mindfulness, a Buddhist technique of awareness of the moment. It was first developed for lucidity (to my knowledge) by German Gestalt therapist Paul Tholey. It’s recounted well by Stephen LaBerge.

Definitely make one of your reality checks reading. It’s very difficult during lucidity. After much practice, I can sort of do it but the words don’t make a lot of sense.

This technique works by what is termed ‘REM rebound’. The early half of your night’s sleep is very light on REM. REM is associated with the sleeping cycles during which we are more likely to remember dreams (it is no longer thought to be the only part of sleep during which we dream).

If you remove the opportunity for REM just as your body would naturally be doing it, it will grab it with both hands when you go back to sleep. This forced method of jumping into dreams produces more lucidity. Perhaps it’s because the break between normal consciousness, the loss of your secondary consciousness in other words, and dreaming is far shorter.

These ‘waking from inside your dream’ techniques are called DILDS (dream induced lucid dreaming). There are other techniques, such as ‘Mnemonic Induced Lucid Dreams’ (MILDs) and ‘Waking Induced Lucid Dreams’ (WILDs) but don’t worry about those ‘til you’ve got DILDs licked. WILDing consists of falling asleep consciously. It’s a toughie and I’ve only ever managed it once.

If you want to bypass all the mental discipline, you could invest in a device called a Dreamlight. It’s a mask-like contraption which fires little light impulses at your eyes when it detects rapid eye movement. If you’re in a dream and notice these light flashes, you can then become self-aware that you’re dreaming – lucidity. I’ve never tried a Dreamlight, so let me know your results.

There are also pharmacological aids to lucidity. They broadly work on trying to increase certain neurotransmitters to assist with levels of concentration, awareness and memory. I don’t know of anyone with a better grasp of the area than Thomas Yuschak.

However, “watch out, you might get what you’re after” to quote David Byrne. Lucidity is the sibling of sleep paralysis. Here’s a diagram wot I drew earlier: 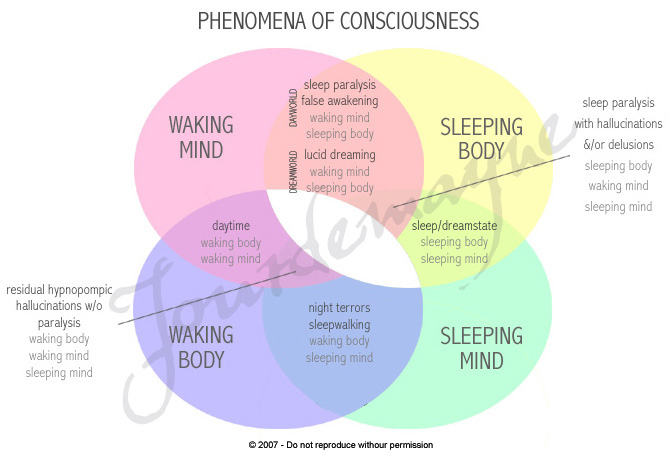 In fact, everything you do to avoid sleep paralysis, you do to attain lucidity. Sleep on your back, upset your sleep cycles, nap during the day …

You can see from the illustration that waking mind (ie. secondary consciousness) and sleeping body can occur simultaneously: when the real world is perceived it’s sleep paralysis; when the dream-world is perceived it’s lucid dreaming. It’s a tiny bit more complicated than this – sleep paralysis is often associated with dread, for example – but I broadly believe they’re basically the same states acted out in different arenas.

This is why I really don’t recommend the pharmacological approach for beginners. You can get stuck in ugly places. Here’s an excerpt from my dream diary after my first attempt with galantamine, an acetycholerinesterase inhibitor derived from snowdrops and used in (much) larger doses by people with Alzheimer’s:

I’m philosophical about waking up screaming from nightmares about six times per month (long-suffering Mr. Jourdemayne, less so) … so if an experience made me nervous, it should probably make others nervous too. I remember that experience clearly and it wasn’t good. Luckily, the next one was better and I’ve been fine ever since.

Out of Body Experiences (OBEs) may also be connected with lucidity. Anecdotal evidence suggests this is so. But that’s a huge subject and I’ll need another blogpost for it.

The New Scientist article mentioned the potential of beneficial mental health applications for the understanding of consciousness through lucidity. But is there any value in it for regular Joes?

I think that firstly, it’s huge fun. Why wouldn’t you do it?

Secondly, it can be akin to meditation in value. The whole point is the mental discipline which is both the route and the reward.

Tibetan Buddhists have been doing this for years and developed the practices which are being rediscovered today. Tenzin Wangyal Rinpoche writes:

Ideally, the skills you develop will help you to think more creatively and expansively, and to concentrate.

His techniques for lucidity will sound familiar from the earlier part of this blogpost. He recommends meditation, avoiding the three pitfalls of agitation, drowsiness and laxity. His four foundational practices of lucidity are: recognising the dream-like nature of life; remove grasping and aversion; strengthening intention; cultivating memory and joyful effort.

At this point, I would like to remind everyone that I am a Jedi and have complete control over my dreamstates.

However, that would be telling big fat fib. It is my experience that the state is subject to a whole host of factors, some beyond your control. You can practice lucidity and even get good at it, but you’ll find that it’s frustratingly affected by many extraneous factors.

When that research is done, I look very much look forward to reading the updated New Scientist article.