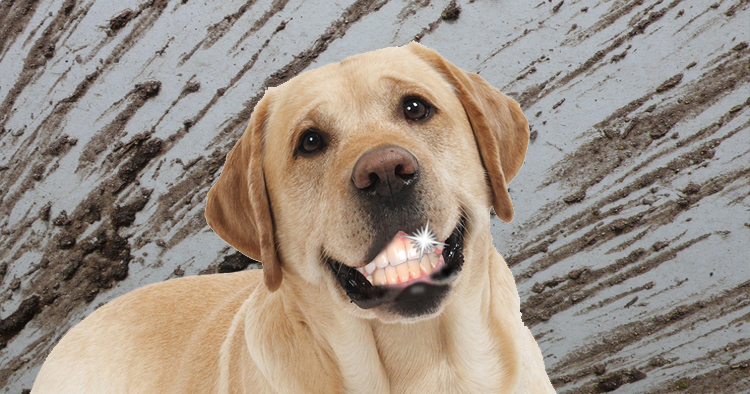 When I was about three years old, my mother was one day alarmed to see that our dog was foaming at the mouth. A prompt investigation revealed several pertinent facts:

I’d like to convey the fear and hysteria which surrounded that incident and the scars it left of my half-formed psyche – it would explain a lot of personality defects for which I don’t care to take responsibility.

But I can’t. My mother was a sensible woman who, while not delighted, also knew she wasn’t going to die of Parvo that afternoon. As soon as she was able to stand again, we went shopping for a new toothbrush and she explained to the three year old me that we had other arrangements for the dog. That was the end of it.

Some people seem to have a vague sense of contagion about animals, and about dogs in particular. If you ask them why, they always cite the old ‘snuffling their own gonads in mixed company’ issue, but to be fair to dogs, I know a lot of men who would do the same (albeit in private) if they could reach.

Some also cite canine furniture frottering: this unselfconsciously exuberant affection with upholstery can precipitate the Vapours among even the borderline bourgeois, and an emergency trip to the dry-cleaners among those who have run out of their Xanax. However, it’s hardly an insurmountable difficulty. Just asking the dog to stop usually works unless it’s a very badly trained dog, or a very attractive sofa (in which case, the sofa’s obviously been asking for it).

“He’s just helping Mammy polish the furniture”, as Dave Allen so wisely had it.

This sense of contagion has been formalised in some religious traditions too.

Leviticus 11:27 says:
“And whatsoever goeth upon his paws, among all manner of beasts that go on all four, those are unclean to you”.

So while not named as one of the definitely ‘unclean’ animals of Leviticus (like pigs, weasels and snails), the dog probably falls without the boundaries of approbation.

In general, the New and Old Testaments use dogs as an allegory for low status and low morals:

“Outside are the dogs, the sorcerers, the sexually immoral, the murderers, the idolaters, and everyone who loves and practices lying.”
Revelation 22:15

There are also plenty of Biblical references to people being eaten by dogs after a moral lapse, which implies justice in an ignominious death and suggests there were sizeable, low-status dog populations. And the Talmud entreats people to “Breed not a savage dog”.

Rules against breeding savage dogs seem reasonable enough though.
And, despite Leviticus, many Jewish families have pet dogs.

Where dogs are mentioned in the Koran, it is not in the capacity of a pet, but as a working animal. There is an example of dogs as hunters:

“All good things are lawful to you, as well as that which you have taught the birds and beasts of prey to catch, training them as Allah has taught you”
Koran 5:4

“If the hound catches the game for you, eat of it, for killing the game by the hound, is like its slaughtering”
Hadith – Bukhari 7:384

And the ‘Sleepers of the Cave’ had a guard dog:

“We turned them about to right and left, while their dog lay at the cave’s entrance with legs outstretched”
Koran 18:16

So Islamic tradition has generally extrapolated that pet dogs are haraam – forbidden, but working dogs are OK. For example:

“Whoever keeps a dog, a qiraat from his good deeds will be deducted every day, except a dog for farming or herding livestock”
Hadith – Bukhari 3:515

In another story, the angel Gabriel was supposed to visit Allah’s messenger, but did not come. He explained his absence by:

It was reported in the Times in July 2008 that guidelines were being drawn up by the Association of Chief Police Officers (ACPO) to avoid offence to Muslims with the use of working dogs, such as sniffer dogs, in their mosques and houses. Where it was vital to deploy the dogs, it was suggested that they should wear bootees, previously only used to protect the dogs where there was broken glass.

But I imagine this is something of an over-reaction. By the criteria above, sniffer dogs would probably be regarded as legitmate ‘working dogs’ by most Muslims. Imam Ibrahim Mogra told the Times that:

“In Islamic law the dog is not regarded as impure, only its saliva is. Most Islamic schools of law agree on that. If security measures require to send a dog into a house, then it has to be done. I think ACPO needs to consult better and more widely.”

Dog saliva is mentioned in the Hadith, and not in an hysterical way, but in a context which we’d likely all agree with today:

“If a dog drinks from your vessel, wash it seven times”
Hadith – Muwatta 2:36

And the Hadith also has a story of mercy to a dog. A prostitute was forgiven by Allah because she took off her shoe and drew water from a well to save a dog which was just about to die of thirst. (Hadith – Bukhari 4:538).

In fact, it has been proposed by many anthropologists, historians and others that injunctions against certain animals are, in effect, a pre-germ theory, prototypal attempts at a science of hygiene. Again, the Hadith:

Disease:
“Five kinds of animals are mischief doers … the rat, the scorpion, the kite, the crow and the rabid dog”
Hadith – Bukhari 4:531

Not dogs in general – just rabid ones.

For example, it has been suggested that pigs were trefah/haraam (forbidden whether you are Jewish/Muslim) due to the likelihood of ingesting a pork tapeworm, taenia solium, or roundworm, trichinella spirialis.

There’s definitely the germ (ha!) of a thought there, but this reason alone would not account for why people in some places developed an aversion, while others raised pigs or kept dogs, with no less a likelihood of contagion.

We share diseases with many animals. It’s to be expected, since bacteria and viruses are competing as vigorously as we to thrive. Any ecological niche opened by the new proximity of one species to another is a fab chance for a pathogen to upgrade to better real estate. The pathogen starts by being able to transmit from animal to human, then mutates to the point where it can transmit from human to human, at which point you potentially have a human epidemic.

(In fact, our pre-agricultural ancestors were remarkably free of epidemic diseases. These have better opportunities when animals are stationary – living near their own sewage – and when animals of different species start to live together.)

Religious and cultural traditions don’t treat all animals the same in this respect. So there’s something else going on.

The anthropologist Marvin Harris proposed a refined version of a similar idea. For him, so much behaviour was to do with the availability and sources of protein in an environment. He points out that:

“The ancient Israelites arrived in Palestine during the early to middle Iron Age, about 12,000 BC, and took possession of the mountainous terrain which had not been previously cultivated. The woodlands in the Judean and Samaritan hills were rapidly cut down and converted to irrigated terraces. Areas suitable for raising pigs on natural forage were severely restricted.”

So an omnivorous animal such as the pig, in the absence of a forest to forage, could do nothing but compete directly with humans with their food. And needing cover from the sun, they were high maintenance to boot.

The economic environment of the ancient Near East favoured the development of ruminants which could eat things that humans can’t – scrub and grass – and turn them into protein for human consumption. If the land didn’t have much wild game, then supporting hunting animals would represent a poor cost/benefit balance. People in the ancient Near East didn’t need to keep hunting dogs in quite the same way that people in, for example, northern Europe did.

An outlying, old Norse colony in Greenland provides some clues about the status of dogs under different economic conditions. In its heyday, the people of this settlement seemed to regard their dogs with a great deal of affection, even burying them after death. So finding dog bones with butchery marks was a sign to archaeologists of an extreme event or era. In fact, these Norse colonies of Greenland died out within a relatively short period in a mini-ice age of the fourteenth century. They ate their dogs, but only as a last resort before they themselves perished.

Like most predators, dogs aren’t good for meat unless you’re really short of meat-bearing animals. The ancient highland Mexicans ultimately domesticated turkeys, ducks and dogs for meat, but this was in the absence of better ruminants.

I’d recommend any of Harris’ books. They’re elegant and readable, and must have been a source of inspiration for the latest incarnation of this train of thought, Jared Diamond’s ‘Guns, Germs & Steel’.

So I think that a quick trawl through history shows that dog distain probably isn’t related to them truly being filthier than other animals.

In some cases, dogs have a very positive affect on human health. In one of the most deadly public health miscalculations ever, the Corporation of the City of London in 1665 ordered a general cull of domestic dogs and cats, with the intention of stopping the plague. There must have been a general sense that they were ‘dirty’.

However, the dogs and cats were the chief controllers of the real plague vector – the rat flea. It’s a caution against any intervention, unless you have a really good grasp of the system you’re dealing with.

In any case, it seems our own species is not as generally hygienic as the propaganda and adverts for antibacterial gels would suggest. We’re not all clamouring for soap. A 2007 survey co-sponsored by the Soap and Detergent Association found that about 25% of people don’t wash their hands after going to the loo, potentially exposing themselves and the people for whom they cook to some pretty serious nasties like E. coli and norovirus.

If you really want to expose yourself to an indiscriminate biohazard, a sentient dirty bomb, go visit a toddler. They’ll put their fingers anywhere – then right up your nose.

When you have recovered from the first wave of infestation, they’ll go to playgroup, stick their fingers up other kids’ noses and bring a fresh plague back to you.

Repeat up to eight times yearly for about seven years. Then it gradually tails off ‘til they get to an adult rate of around four colds a year or less.

It’s other humans we have to be careful of. Being members of our own species, they are more likely to harbour bacteria compatible with our bodies – far more compatible with us than those of our dogs. If your dog is wormed regularly and you clean his teeth (not with your mother’s toothbrush, BTW), you should be in no particular danger.

Cultural and religious norms are an intuitive way of understanding the universe, and they’re often far from useless. But there is a danger point when lore passes into law. Unlike other laws, religious ones are rarely amenable to change under the influence of evidence. ‘Unclean’ was a very useful concept two thousand years ago. Now that we have microscopes, we can move on.

With our dogs, of course.