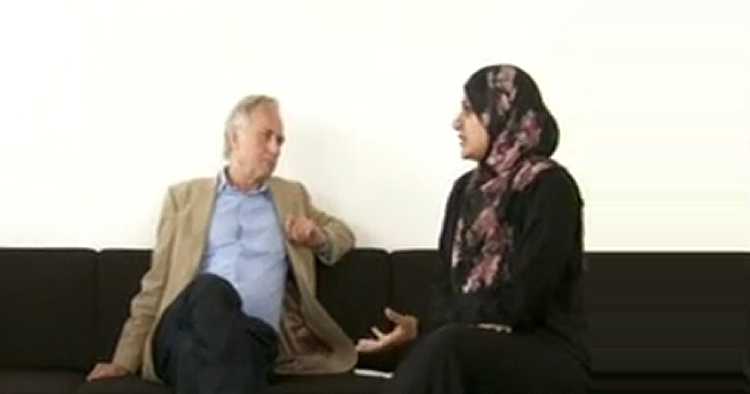 The work of Anne Elk (Miss), undoubtedly one of the overlooked intellectual giants of our age, serves to remind us of the importance of theories. And indeed, how anyone can hold one … ahem!

I cannot gainsay Miss Elk’s evident expertise in the area of paleantology since I know nothing of Brontosauruses.

But I was fascinated to hear the ‘T’ word occur yet again in Richard Dawkins’ recent More4 documentary Faith School Menace?

To its credit, Madani High School in Leicester was the only religious school which allowed Dawkins access. But its openess provided a clear example of an oft-repeated error, a linguistic error, which helps millions of people to ignore the fact of evolution.

I think it may be a source of frustration to people starting out in some academic disciplines that the first two-thirds of any subject seem to be given over to redefining perfectly good words in English. The social sciences excel in this trait. I’ve certainly spent glowering and resentful evenings over what I seem to remember calling at the time “a pile of nit-picking wank”.

See how articulate I get when I’m angry?

But when the pique has passed and you’ve cleared up the broken crockery, you’re left with very precise language. It’s truly useful.

My dictionary says that a theory is:

1 a system of rules, procedures and assumptions used to produce a result
2 abstract knowledge or conjecturing
3 a conjectural view or idea: “I have a theory about that”
4 an ideal or hypothetical situation
5 a set of hypotheses related by logical or mathematical arguments to explain a wide variety of connected phenomena in general terms: the theory of relativity
6 a non-technical term for hypothesis

Do you think civilian usage tends towards definition 3? I do. If you used a thesaurus it would, under that circumstance, probably allow substitutions of ‘opinion’, ‘supposition’ or even ‘guess’.

Which is why, I suppose, all sixty of the year ten students came to the conclusion that the Koran was filling in the missing bits.

But scientific usage of the word ‘theory’ is different. A theory can also be a fact. A scientific theory is derived from empirical data, contains concepts and testable rules, is good at predicting and is disprovable.

A scientific hypothesis is a tentative theory. It’s more in line with ‘theory’ as used by Dr. Mukadam – definition 6 in the list.

It’s a shame the word ‘theory’ covers such a wide gamut in English, because it leads to a lot of misunderstanding in relation to the theory of evolution. Which is a fact.

That’s my theory. It is mine and belongs to me and and I own it and what it is too. Ahem!