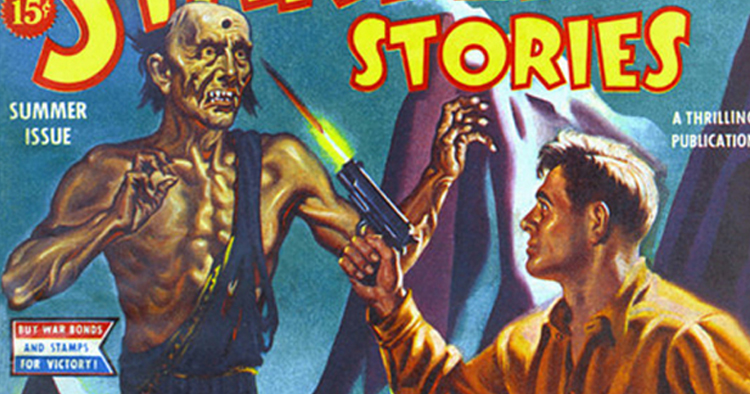 This cover of pulp magazine ‘Startling Stories’ dates from 1944 and illustrates the book’s main feature ‘Strangers on the Heights’ written by prolific fantasy writer Manly Wade Wellman. It clearly features a reanimated cadaver – a zombie.

In retrospect, the twentieth century’s fascination with fictional zombies (which is ongoing – a note for those readers unfortunate enough to live in a cave) is traceable to Haiti’s occupation by the United States between 1915 and 1934. As is often the case with folklore, the astonished commentary of visiting outsiders was instrumental in drawing attention to religious traditions – traditions which had passed unremarked-upon for years in their own environment.

The idea ‘broke’ with the publication of journalist William Seabrook’s influential 1929 travelogue The Magic Island (1929). Seabrook clearly enjoyed his time in Haiti and wrote respectfully, if a little sensationally, of its inhabitants and their religion. But ‘gruesome’ sells better than ‘thoughtful’. It inspired a stage play and – far more famously – Victor Halperin’s film White Zombie (1932), starring horror-favourite Bela Lugosi. The movie’s theme is authentic to the folklore, in that the zombie is the victim rather than the perpetrator.

As American anthropologist and ethnobotanist Wade Davis put it: “In Haiti, the fear is not of being harmed by zombies; it is fear of becoming one”.

Hilary Evans (1929-2011) was a long-standing supporter of The Skeptic and contributed images from the Mary Evans Picture Library for a regular column. Former editors Prof. Chris French and Wendy Grossman wrote about his life here. The column has been running for years, and I took it over in 2011.