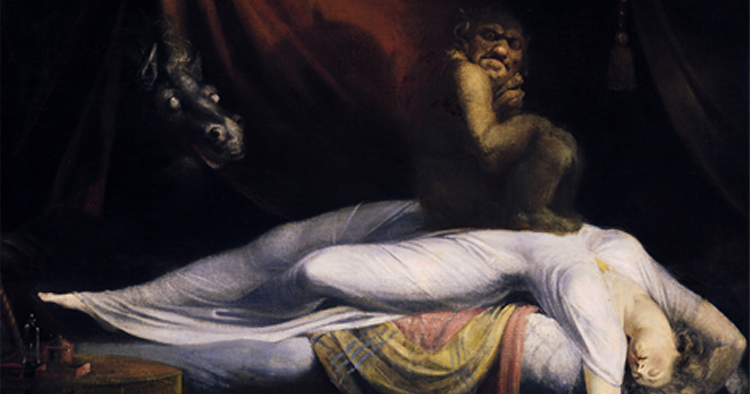 I’ve read my latest free copy of City News – have you? It’s a fab free publication by the Universal Church of the Kingdom of God, an international Pentacostal organisation of Brazilian origin.

Reading about other people’s problems to alleviate desperation at your own may not be the most morally sound pastime, but it’s a human constant. My eye was caught by this one:

“This may sound bizarre and unbelievable, but since a long-term relationship break up I have been getting feelings of something having sex with me. I can fell myself being pushed down and this thing on top of me …”

The reply is as follows:

“I certainly do believe you and trust me when I say that you are not the only one that is going through this problem. Surprisingly, it’s quite common but people are often embarrassed to seek help for it and often, if they do seek help, they do so in the wrong places. The good news is that we have helped thousands of people overcome this problem. As it is a spiritual problem and not a physical one, it must be fought using spiritual weapons. I would like to invite you to participate in our Friday services for spiritual cleansing. You will receive strong prayers against all negativity and to break any curse. A pastor will be able to give you advice on what else you will need to be totally free from these attacks.”

“Some examples of Spiritual Attacks which include persistent dreams, sexual attacks, the feeling of being choked in dreams and the paralysing attack where one feels as if an overwhelming force comes over him and takes control of his whole body, except his mind. He can see what’s happening around him, but has no strength to react”

The Church again recommended attendance at its ‘Deliverance Services’.

Digging through history, it isn’t hard to find other examples of this phenomenon. Here are a few more:

“I sleep – for a while – two or three hours – then a dream – no – a nightmare seizes me in its grip, I know full well that I am lying down and that I am asleep… I sense it and I know it… and I am also aware that somebody is coming up to me, looking at me, running his fingers over me, climbing on to my bed, kneeling on my chest, taking me by the throat and squeezing… squeezing… with all its might, trying to strangle me. I struggle, but I am tied down by that dreadful feeling of helplessness which paralyzes us in our dreams. I want to cry out – but I can’t. I want to move – I can’t do it. I try, making terrible, strenuous efforts, gasping for breath, to turn on my side, to throw off this creature who is crushing me and choking me – but I can’t! Then, suddenly, I wake up, panic-stricken, covered in sweat. I light a candle. I am alone.”

“… a difficult respiration, a violent oppression on the breast, and a total privation of bodily motion … In this agony they sigh, groan, utter indistinct sounds, and remain in the jaws of death, till, by the utmost efforts of nature, or some external assistance, they escape out of that dreadful, torpid state. As soon as they shake off that vast oppression, and are able to move the body, they are affected with strong Palpitation, great Anxiety, Langour, and Uneasiness”.

“persons suffering an attack suffer an incapability of motion, a torpid sensation in their sleep, a sense of suffocation and oppression, as if from one pressing them down, with inability to cry out, or they utter inarticulate sounds. Some imagine often that they even hear the person who is going to press them down, that he offers lustful violence to them but flies when they attempt to grasp him with their fingers”

“ … one passion is almost never absent – that of utter and incomprehensible dread … In every instance, there is a sense of oppression and helplessness … he [the victim – J] can hardly drag one limb after another … his blows are utterly ineffective”

“You are dreaming and you feel as if someone is holding you down. You can do nothing only cry out. People believe that you will die if you are not wakened” and “I remember waking up flat on my back. Paralyzed … Terrified beyond anything I’d ever experienced before … Sensation of pressure on my chest. The terror! The terror was both from being paralyzed and I knew there was something else in the room.”

Quoted by David Hufford
‘The Terror That Comes In The Night: An Experience-Centered Study of Supernatural Assaults’ (1982)

Even Jonathan Harker, seeing Dracula advance upon him says: “ … I would have screamed out, only that I was paralysed”. 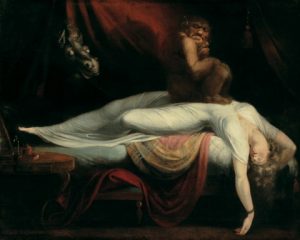 And here’s a well-known pic by Henry Fuseli.

At this point, I should declare my competing interests: I get attacked by demons too. Or ‘sleep paralysis’, as we call it in the real world. It’s not that unusual, and there’s really no evidence that it’s caused by demons.

David Hufford (cited above), listed what he felt were the primary features of the experience, which were an impression of wakefulness coupled with immobility and a feeling of fear. In addition, he noted that a person’s actual setting was correctly perceived in contrast to a dream state where their surroundings could be distorted or false.

Common secondary features included the sleeping position – 90 percent of Hufford’s sample were supine. Pretty much every writer on the subject, to my knowledge, has also noted this aspect. He even found some evidence that a disproportionate number of attacks are suffered by people in traction, or people who were doing systematic relaxation training such as yoga.

Other secondary features include a feeling of pressure on the chest and a sensation of threatening intent or evil nature from a supernatural being. Sounds are also often heard, such as the sound of door or ‘footsteps’ – ‘whooshing’ or ‘shuffling’ noises.

Only slightly less frequent was the sensation that the victim would die: “The dread of suffocation, arising from the inability of inflating the lungs, is so great, that the person … generally imagines that he has very narrowly escaped death” Waller wrote in his A Treatise on the Incubus, or Nightmare of 1816. In some rare cases, victims reported an odour. There is also often a sexual element.

It’s easy to understand why people have historically regarded it as a supernatural affliction. “If you didn’t have the notion of ‘evil’, you’d have to invent after an encounter like that”, as one audience member put it at a lecture by Chris French on sleep paralysis at Goldsmiths on November 10th this year.

But more mundane causes have been sought since the time of Galen, who thought the affliction due to gastric disturbance – hence the old advice about not eating cheese before bed-time. It appeared as an explanation of nightmare as recently as 1902 in The Chambers Encyclopedia. The theory underwent a minor change at the turn of the twentieth century, when it was wondered if it was the circulation rather than the digestion which was so critically afflicted by sleeping supine, which in turn caused nightmares. Kant had even formulated the idea that nightmare (the word used in its traditional sense) was a beneficial process which alerted a sufferer to the circulatory distress of his heart.

King James in his Daemonologie of 1597 ascribed them to a “naturall sicknesse … a thicke fleume [phlegm – J], falling upon our breast into the heart, while we are sleeping” while others thought it nothing more than too deep a sleep. Freudian psychoanalyst Ernest Jones attributed nightmares down to mental conflict over repressed sexual desires.

In the modern age EEG technology has helped us to understand the different stages of sleep. Sleep paralysis, described broadly, is when your waking and sleeping functions mistime and collide: there is the normal paralysis of a sleeping body in the REM state (or you’d act your dreams out) but a conscious, rather than dreaming, mind; there is the depressed breathing rate of a sleeping body but panic at what may seem to be insufficient breath; there is the correct perception of your environment, but accompanied by dream phenomena such as dream hallucinations.

Sleep paralysis has been a major contributor to the folklore of fear. One day, when I’ve finished my book, you can read about Maras, Hags, Cauchemars, Civatateos and their kin (which probably includes aliens).

Meanwhile, if you have any weird experiences and can’t afford the bus fare to your local UCKG, take comfort from the fact that the attacks are a well-known, well-described phenomenon, are usually sporadic and will probably just go away. The following precautions are sensible, and probably all you’ll ever need:

When the hideous hag/demon/alien/Cadbury’s Smash Robot (go on, laugh at my pain!) advances on you, to your best to feel love and acceptance. Sounds weird. It works. They turn into bunnies, kittens … lovely things. The fear is self-begetting and counter-productive

… which is why is bothers me profoundly that people who offer an intervention, do so by encouraging a belief in demons.

The UCKG’s publication is clear in several respects:

“it is a spiritual problem and not a physical one, it must be fought using spiritual weapons”, and the most appropriate service is for “spiritual cleansing” which can “break any curse”.

Although there is a disclaimer in tiny print on the back page that the spiritual advice is “a compliment to scientifically proven treatment you may be receiving”, it neglects to mention that more mundane explanations and interventions for sleep paralysis exist at all.

Well, they will by next week – I’ve written to them. I’ll keep you posted.