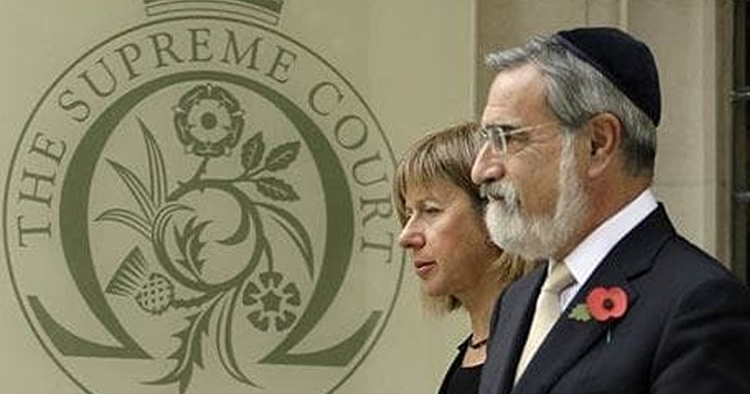 In ‘The Merchant of Venice’ Lancelot tells the Jewish convert to Christianity, Jessica, that there is no mercy for her in heaven as she is the daughter of two Jews. Her only hope is that her mother got her with another man. In Lancelot’s worldview, Jessica’s actions in life clearly cannot eradicate her ancestry on one hand, nor her mother’s adultery on the other. She says:

“That were a kind of bastard hope indeed, so the sins of my mother should be visited upon me”

In June this year, the Court of Appeal found that the Jewish Free School in Brent had discriminated against a child on racial grounds. The school has an excellent Ofsted ranking, is constantly oversubscribed and is able, under the present rules, to pick and choose its pupils when there is a surplus of candidates. At the JFS, there always is.

The issue with ‘child M’ is that his father was born Jewish, but his mother is a convert. The Office of the Chief Rabbi does not recognise her conversion as valid, since the ritual was performed under Progressive, rather than Orthodox, auspices. Child M is an observant Jew, as are the members of his immediate family.

So it’s not the practice – it’s the paperwork.

Lord Pannick QC, for the school, which operates under Orthodox rules, argued that the discrimination was not ethnic: “… a faith school is entitled to adopt an oversubcription policy that gives priority to those children who are members of the religious faith as defined by the religious authority of the faith.” And the ‘religious authority of the faith’ here clearly likes to maintain a good degree of control over the validity of conversion rites.

I think this tortured issue is difficult, and even distasteful, to a modern, liberal mind for a few reasons. They revolve around the issue of identity in a modern context.

Firstly, there is the ethnic element – and there undoubtedly is one. Dinah Rose QC, representing child M, has pointed out that the JFS would accept a child of ethnically Jewish atheists but exclude others with non-Jewish mothers even when they were “Jewish by belief and practice”. And it occurs to me that as the OCR normally holds Jewishness to be matrilineal, this problem would presumably not arise with an ‘improperly’ converted father; his ethnicity would be irrelevant in relation to his child’s religious identity. So there are gender equality issues too.

Secondly, I think it jars with the modern trend to individuality, the permission to ‘self-declare’. We would resist being told which football team to support, which way to vote and which clothes to wear. We create our identities by our choices and we expect to be able to choose our religion: “Jesus is my saviour”, “There is no god but God, and Muhammad is the Messenger of God”; it’s unusual, in a modern context, to be excluded from a group after that.

There is an historical tradition of religions as guilds – protected organisations where you were ‘admitted’ rather than where you ‘joined’. Initiation into the Mithraic Mysteries was influenced by your class and profession (and certainly by your gender). Entering a medieval religious house was also encumbered, as you usually needed to bring money with you. Perhaps it’s a sign of demand that a group can afford to be so picky. It isn’t a particularly modern model.

Thirdly, there is a modern sense that as an individual, you should pay the price of your own mistakes and benefit from the bounty of your own successes. We aren’t supposed to inherit sins or privilege. Horace’s “For the sins of your fathers you, though guiltless, must suffer” is often sadly true – babies are born with defects from alcoholic mothers, for example. But in a modern context it’s an sometimes admission of regrettable causality, not a mission statement.

For example, there is a class of indentured labourers in modern Pakistan called the haari who have been likened, even by organisations as august as the UN, to slaves. They are landless peasants with debts to pay before they gain their liberty, but these debts are not self-incurred. When a child of a few months has a debt that will take years to pay off, we have a sense that he is a different case than a man who has just blown the equity on his house in a poker game.

The Appeal Court in June appears to have judged that the tradition matrilineal test of Jewishness was by definition discriminatory: whether “benign or malignant, theological or supremacist” this “makes it no less and no more unlawful.” “The requirement that if a pupil is to qualify for admission his mother must be Jewish, whether by descent or conversion, is a test of ethnicity which contravenes the Race Relations Act”.

It pointed out that: “If for theological reasons a fully subscribed Christian faith school refused to admit a child on the ground that, albeit practising Christians, the child’s family were of Jewish origin, it is hard to see what answer there could be to a claim for race discrimination.”

The issue has certainly created a great deal of discussion within the Jewish community and there are probably significant splits of opinion between different groups, not least between the liberal and orthodox.

The school went to the Supreme Court to ‘appeal against the appeal’* at the end of last month. We await the final outcome.

But for me, the point of the matter is that in our own times, we expect a person to be defined by their practice rather than their provenance. It seems that the fact of this court action has achieved this in some measure, as the JFS’s new admissions policy gives weight to charitable works and attending the synagogue.

Personally, I support the BHA’s call to phase out religious schools “unless they too can be persuaded to become inclusive and accommodating institutions”. Where tax-payers’ money is involved, it seems only fair.