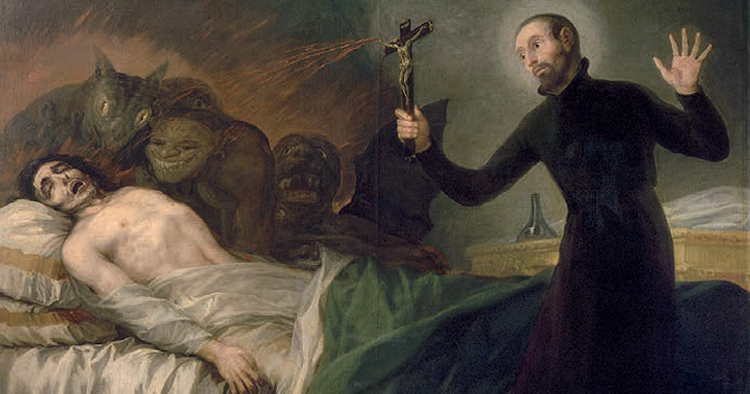 Today, I’m thinking about exorcising. Not running on the spot – that’s a good thing.

For the self-sufficient there is the one-day course approach. Very reasonably priced at fifty-nine pounds, this was offered recently by Atlantis Bookshop in London. Their ‘leading expert’ David Goddard has been ‘an authorized exorcist for over 20 years’.

In touch with the spirit world or the spirit cabinet – I really don’t know. I didn’t go.

But I was relieved to discover that the syllabus included how to distinguish between possession and mental ill-health. Absolutely vital that.

This autonomous approach would probably suit the kind of people who crochet their own bedspreads, change their own engine oil and so forth.

On the other hand, if you’re keen on authority, you know, the sort of person who calls in an electrician to change a plug fuse, you can go with a recognised establishment, with training courses and titles, such as the Catholic Church.

In November 2010 Bishop Thomas J. Paprocki of Springfield, Illinois organised a two-day conference on exorcism attended by 56 bishops and 66 priests. The New York Times noted that there is a lot of cynicism surrounding the issue of exorcism in the US today and wrote that “efforts to interview the (delegates) on Friday were unsuccessful”.

Not quite as shy, is Father Gary Thomas, the Catholic exorcist for the Diocese of San Jose, who has been interviewed for this month’s ‘Catholic World Report’. His previous exposure in the media has included being the subject of Matt Baglio’s book (& now a movie) ‘The Rite: The Making of a Modern Exorcist’.

The piece is entitled ‘Doorways for Demons’ and carries a photo of Father Thomas bearing a lightly constipated grin. He tells us that there were about half a million exorcisms in Italy. Per year, that would be an impressive feat not to mention a significant aspersion upon the moral fibre of a nation of around sixty million souls. Perhaps he means the aggregate of rituals for which the Vatican has records.

But personally in five years, he claims to have met with 100 people and performed 40 exorcisms on about five of them.

Perhaps it’s like waxing – perhaps you have to keep going back.

He says:
“… there are more and more Catholics involved in idolatrous and pagan practices. That’s really why there’s more demonic activity.”

Also:
“A lot of parents today have no critical eye of faith with which to even recognize the dangers their children are in. A lot of this is going on with the Internet.”

In the study of witchcraft and demon-related beliefs, there’s a great deal of energy put into discussing whether such belief systems are, to use the lingo, ‘bottom-up’ or ‘top-down’. Are the authorities forced to deal with what are actually rank and file experiences, or do they precipitate or interpret such experiences further down the social ladder from themselves by their expectation of them.

I think most historians believe that there’s evidence of both.

Just for the moment, let’s think about witch trials in England, say.

Prior to the eighteenth century belief in witchcraft was probably pretty endemic, but really got out of hand when traditional social structures started to crumble in the Tudor era. Witches were often deeply impoverished people who had asked for charity but had been refused. If the refuser subsequently had some misfortune, they blamed the alleged witch. Let’s face it, the refuser did sort of deserve it. It’s quite a clear case of projected guilt.

Then local constable or magistrate would get involved.

Bottom up. It’s an oft-repeated pattern.

But you can perceive sinister hints in witch-hunting history about top-down phenomena too. A couple of the most celebrated English witch trials had highly educated men at their centre and it’s even questionable whether the trials would have stood, without the educated input and manic focus of these people.

In 1589, ten year old Elizabeth Throckmorton, who had recently moved to Warboys, accused her new neighbour Agnes Samuels of being a witch. Elizabeth appears to have been epileptic and quite ill. But her afflictions, characterised by massive fits, sneezing and channeling demons, were soon communicated to four of her sisters and eventually, several of their extended household.

Elizabeth’s Uncle was Henry Pickering. He was an educated man from a prominent family. And at this early stage in his witch-hunting career he conducted systematic experiments with his niece to demonstrate real demonic possession. He also took Elizabeth to live with him for a spell, made copious notes and eventually gave evidence at the trial of Agnes Samuels, her daughter and her husband.

In the case of the Lancashire Witches of 1612, Justice of the Peace for Pendle, Roger Nowell, interviewed a young woman named Alison Devize who’d been accused of bewitching a peddlar.

Alizon talked about her black dog – her family seems to have been fond of animals and this was unfortunately a characteristic attributed to witches. Somehow, in the telling of the story, the black dog became her familiar. Alizon may even have been trying to displace the blame from herself to the dog for the peddlar’s illness which was probably a stroke.

Another of the witches, an old woman known locally as Chattox, told Nowell of a ‘thing like a Christian man’ who had asked for her soul many years ago. In the religious turbulence of her lifetime (bear in mind she was probably in her 70s by 1612) – he could even have been a religious proselytiser of either Puritan or Catholic stamp. But Nowell interpreted him as the devil himself to whom Chattox had sold her soul.

Via Nowell’s questioning, the Lancashire Witches’ accounts conformed to the scholarly beliefs contained in such books as the Malleus Malificarum, William Perkins ‘Discourse of the Damned Art of Witchcraft’ and King James’ ‘Demonology’.

The interviewees inadvertently confirmed a highly evolved metaphysical schema that Roger Nowell knew in detail and which they likely didn’t.

Those deaths were caused by, as much any other factor, highly earnest and highly educated men labouring under a gross misapprehension.

As historian Keith Thomas wrote: “men seldom seek a high degree of proof for what they already believe to be true”

He also notes about cunning men – men who found witches, that it was in their: “… interest to diagnose witchcraft, after all, because they had a near monopoly of techniques for dealing with it”

Does that ring a bell given how we started?

In 1602 there was an exchange between Lord Chief Justice Anderson and a Dr Jorden who was defending Elizabeth Jackson against charges of having bewitched Mary Glover. The Lord Chief Justice seemed unsatisfied that Jorden thought Glover’s condition neither fabricated nor amenable to medical intervention.

“Then in my conscience” he said “It is not natural”.

It’s nice that modern exorcists like freelance demonologer David Goddard and Father Gary Thomas take account of the possibility of mental illness before they get the paraphernalia out. Father Gary has a psychologist, a psychiatrist and a medical doctor on his team.

But, despite Lord Chief Justice Anderson’s protestations, just because we can’t cure it yet, it doesn’t mean it’s not natural. And if you were suffering from an as-yet undiagnosed condition which led to mental distress, do you think a man confirming your belief in the dreadful powers of Satan and all his little fiery minions would make your anxiety worse or better?

History clearly shows us that highly educated and sometimes well-intentioned people can precipitate the most dreadful of consequences.

Be nice if it wasn’t still relevant, wouldn’t it?