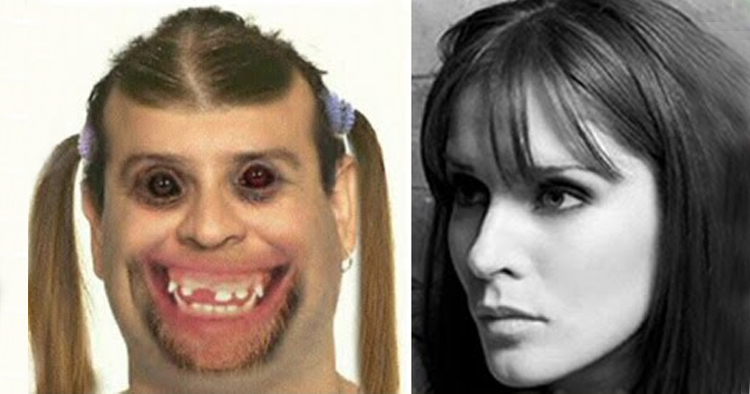 I get several pictures of very attractive young women sent to me every week.

No, I haven’t finally activated my month’s free trial of BiCuriousMatch.com. I am the MD of a company which produces makeup effects and props for film and TV, and we get lots of CVs from graduates.

Either being 22 and female is an intrinsically gorgeous state, or they don’t let mingers into art school. Every candidate I get to see would turn heads rather than stomachs.

The CV thing puzzled me for ages. Then I thought it must be to try and get an edge in what is, admittedly, a male dominated profession. You can’t blame a girl for using everything she’s got. By my age you’re not expected to include a photo with a job application or they might think you’re addled and have confused your resumé with your Meals-on-Wheels application.

But when you’re young and junior, could your appearance weigh more heavily in your favour?

I finally asked a graduate who was working for us. She’d been hired on recommendation, BTW. I didn’t see her CV ‘til she showed it to me and asked for feedback.

It turns out the reason all the CVs all look similar and all include a photograph in the same place is not because they have used Microsoft PimpMySkillsTM. It’s because someone comes in before they finish Uni. to teach a one day course. This person solemnly assures them that a photo is the way employers “will remember you and differentiate your CV from someone else’s.”

A few years ago, at the beginning of the internet explosion, I used to put commercial websites together. At dinner one night, a teacher friend told me excitedly that she’d been on a website course at work and been told a critical piece of information: don’t put the words “child” and “play” in the meta-tags for fear of attracting paedophiles.

Now, spending a whole day teaching web design to naïfs back in the day when it would have taken you all the way up to coffee break – max – to say that you close a tag with a backslash must have left some poor bastard with another three quarters of his consultancy fee to justify. But did he have to scrape the bottom of that particular barrel? He could have spoken to one of my art graduates about designing good user interfaces, for example.

I mean, sometimes you can just tell that someone’s making it up for the sake of something to say, especially if they’re being paid by the hour.

Today, I read an article which has a bearing on the photo issue.

The New York Times has a piece on ‘Beauty Discrimination During a Job Search’ based on a paper ‘Are Good Looking People More Employable?’

Ruffle and Shtudiner of Ben-Gurion University noted in their abstract that:

So they “sent 5312 CVs in pairs to 2656 advertised job openings.” One of the CV’s had no picture attached – but its compatriot contained a picture of either an attractive man or woman, or a “plain” man or woman.

I’m guessing they’re using the term “plain” in a politically correct way to denote “unattractive” as opposed to “unremarkable”.

The first interesting thing to notice is that there was a difference in results according to whether the CVs were sent to an agency or directly to the potential employers.

Female beauty didn’t seem to matter hugely to agencies, whose ‘no photo’, ‘plain’ and ‘attractive’ rates for women are in a similar ballpark. Not identical, but close.

Male beauty, however, made a big diff to the agencies. If you take the 13.5% ‘no picture’ as a baseline, then being fit gives a man a 7.3% edge, and being frightful reduces his chances by 5.2%. Not nice.

And if the CVs went directly to potential employers?

The results for males look like a slightly squished down version of the ‘agency’ result. ‘Plain’ gives worst results, ‘attractive gives the best and ‘no piccie’ is in the middle. There’s only a 5% difference maximum & minimum values.

So good-looking men always do better when they send a photo. The degree to which their gorgeousness counts just depends on whether they’re going through an agency or not.

If you’re a male and not so easy on the eye, just avoid the visuals.

The interesting results come when we get to ‘potential employers’ and ‘women’.

Ready for this ladies?

‘No piccie’ does best of all. Tagging slightly behind – so slightly that the results could come out differently in repeated study – is the ‘plain’. And nearly 6% behind ‘plain’ is … ‘attractive’. 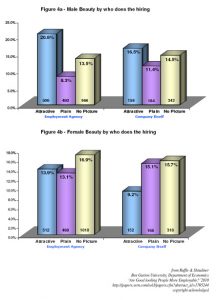 So if you are stunning and female, don’t send a picture to a potential employer, no matter what the one-day consultant twerp at uni. says.

Ruffle and Shtudiner attribute this skew to the initial CV screening HR department done by people who were usually female, between 24 and 36 and often single.

They go on to conclude that discrimination against attractive women was therefore influenced by envy “when confronted with a young, attractive competitor in the workplace.”

Ouch. What happened to the sisterhood?

In my own business, I’d still actually recommend the photo route for pretty young women. As I said, it’s a male dominated world and we don’t really have formal HR departments. And if you land on my desk I’ll pay more attention to your folio than your fizzog.

But for the corporate sphere, a babe had better wait ‘til she’s hungover before taking the photo or else not send one at all.

There are two substantive issues here for me.

The first and hopefully most obvious point is that it shouldn’t really matter whether you’re a honey or a honey monster. The “employers will remember your CV by your photo” strikes me as one of the most conspicuous outbreaks of bollocks I’ve heard for a while. Photos are to see what you look like, and what you look like shouldn’t matter.

I recently spoke to a US news-reporter who had been displaced in favour of – literally – a beauty-queen-news-reporter. Even if she looked like Jabba the Hut (she doesn’t), would it have affected the journalism?

Secondly, who the hell are these people giving out advice in unis., advice which flies directly in the face of the evidence? Who is paying them and why?

I’ve spoken to several people here in the US (I’m here for a short spell) and they’re taken aback at the thought that photos should be attached to anything other than crime scene reports. But their anti-discrimination attenae are a bit more finely tuned than ours.

They feel, rightly I think, that photos for jobs can be a minefield of prejudice. I bet Ruffle and Shtudiner would agree.