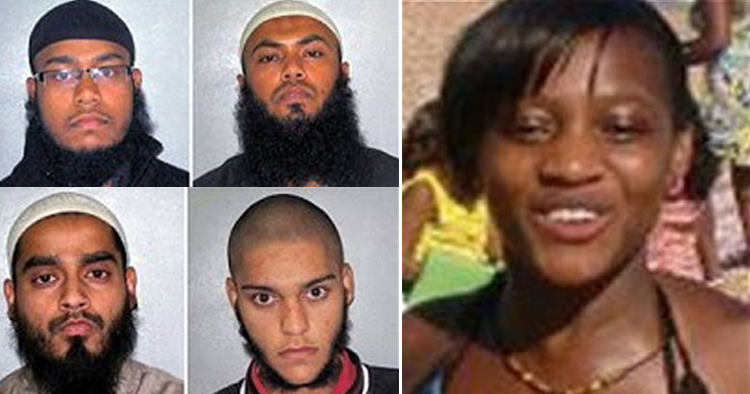 Two news stories have caught my attention this week. In one, four men were jailed for an attack on Tower Hamlets religious studies teacher Gary Smith. There are news reports here and here. And a statement on The Met’s website here.

It was horrific. Mr Smith’s face was deliberately slashed from his mouth corner to his ear. He suffered leg wounds, a fractured skull, bleeding on the brain, a shattered jaw and was unconscious for two days.

It must be harder than I realise to get an attempted murder charge to stick. Akmol Hussein, 27, Sheikh Rashid, 27, Azad Hussain, 26, and Simon Alam, 19 were sentenced for causing grievous bodily harm with intent.

The attack was clearly premeditated and at least one of the assailants had mentioned death as an objective:

On the premeditation: the group succeeded on their third attempt. Superintendent Colin Morgan of Scotland Yard said:

“This was an unprovoked and premeditated attack by a group of men who were carrying weapons. Mr Smith was struck without warning, and was subjected to an appalling level of violence with no opportunity to defend himself.”

And just before the attack Azad Hussein said:

On the objective of death: Akmol Hussein had been recorded saying:

Fortunately, Hussein’s car had been bugged in an investigation into a suspected terrorist network. Unfortunately, the police didn’t get any information prior to the assault.

Gary Smith had invoked the gang’s ire by teaching Islam, along with other major world religions, in national curriculum lessons.

“…he’s mocking Islam and he’s putting doubts in people’s minds…How can somebody take a job to teach Islam when they’re not even a Muslim themselves?”

And after the assault he had said:

“Praise to Allah. At that time nobody was there…Bruv, I don’t care about prison as long as I’m doing it for the deen [religion] of Allah…you know what, he’s not going to get up”

I was equally fascinated by the case of Lorraine Mbulawa, who had stabbed her mother four times in the arm and once in the face at their home in May 2009. There’a an account here.

Mbulawa had had a dream:

“… that seemed a bit real. It was my grandma and dad’s youngest sister, Charlotte. Like they were right at the foot of my bed … my grandmother said my mother was responsible for the death of my father and I had to do the honourable thing to my father by killing my mother”

She had put on some dark clothes, gloves and a makeshift balaclava, and gone into her mother’s room with the intention of killing her.

Mbulawa was cleared of attempted murder but found guilty of unlawful wounding at Leicester Crown Court in February as reported by the local paper on February 5th.

She and her family are Christian and from Zimbabwe, where belief in witchcraft is pretty well endemic. In sentencing last week, Mr Justice Keith reiterated what had emerged in the trial, that Mbulawa and her family believed in the power of the occult, in spirit possession and that she was not responsible for what she had done. He said that her mother:

Despite her mother saying that Mbulawa was not “her real self” while conducting the attack, the jury made their opinion known by rejecting the option of finding her not guilty by reason of insanity – an option they did have. As Mr Justice Keith pointed out:

“In convicting Lorraine of unlawful wounding the jury must be treated as having rejected her claim of being in a dissociative state. The jury treated Lorraine as if she knew what she was doing at the time of the attack”

In addition, she had been assessed by a psychiatrist who had found her to be sound.

The sentences handed down in these two cases are markedly differerent. Of Gary Smith’s attackers, three will serve at least five years and maybe more; the fourth will serve a minimum of four years, maybe more. The details are at the bottom of the page here.

Lorraine Mbulawa has presumably been on some sort of remand (I don’t know if it was custodial) since May 2009, as her contact with her mother has been supervised and she is only now allowed to return to the family home to live. She has been given a 12 month custodial sentence suspended for 18 months. She must also do 120 hours of unpaid work and attend supervision to help her understand her beliefs so she could deal with any supernaturally inspired violent urges in the future.

These contrasting sentences may be attributable to several factors.

For one, the victim impact statements each both case will have been very differerent. Gary Smith’s injuries were more severe and he may never completely recover. He is unlikely to be sympathetic to his assailants’ world-view or motivation. Sibusisiwe Mbulawa, by comparison, had lesser injuries and feels she understands her daughter’s behaviour completely.

What the Future Will Hold

Another is the likelihood of perpetrating again in the future: Gary Smith’s assailants were united by a life-principle that would be likely to lead to further violence and which will be highly difficult to erase. The judge clearly feels that Lorraine Mbulawa, by contrast, can be taught to deal with her worldview in a way that will reduce her chances of perpetrating in the future.

Remorse will have been another factor. It’s hard to see how the Tower Hamlets four could have plausibly pleaded moral anguish after their celebratory conversation was recorded. Mbulawa, on the other hand, told police of her intention to kill herself after she had killed her mother.

Culpability may have been yet another issue. Despite the jury’s rejection of the notion that Mbulawa may have been insane at the time of the attack, Mr Justice Keith said:

whilst also still laying the responsibility at her feet:

Acting under duress – compulsion from outside – is a defence in law. But the law restricts itself to agents such as blackmailers, people who have kidnapped your granny and so forth. Spirits don’t count, and that’s fine by me.

And I detect yet another consideration, from left of field. Mbulawa is simply more attractive, in every respect. Mr Justice Keith said:

“I believe she’s a young woman with much going for her. She struck me as being unusually confident and assured, also not unintelligent with a degree of charm and poise”

She is young, pretty, was an A-level student and, unlike the Tower Hamlets four is not the embodiment of a current much-feared archetype, the regressive jihadist.

Yet for all their differences, these two crimes have one very significant theme at their hearts: people who were judged by the courts to be mentally competent were motivated to potentially murderous acts under the influence of utterly unprovable supernatural worldviews.

I spent an interesting afternoon once with a senior police officer who deals with occult-related killings. His interest in the precise nature of beliefs was limited: his focus was on whether or not an actual crime had been committed. For that, I think he deserved great professional credit: like Elizabeth I, he had: “no desire to make windows into men’s souls”.

But clearly, thought processes do matter – and to the courts too. Psychological evaluations that assess culpability and fitness to stand trials must make windows into men’s souls. To a certain extent, we can determine culpability and the likelihood of re-offending using those windows.

We choose the parameters of our rationality, and those parameters move from time to time. If we commit a crime under a popular delusion, we are more likely to be judged sane. With a social animal like us, it’s actually quite reasonable: the sharing of a doctrine, a cognitive concensus, is certainly a measure of our integration with our community, if not our grasp of objective physics. A person motivated to murder for Ereshkigal would be ancient Iraq’s religious fanatic, today’s whackjob.

Perhaps this is another area where Mbulawa gets off as being mad rather than bad in the UK. We’re more familiar with jihadism, but the witchcraft paradigm has been under the radar ‘til recently.

James House, for the prosecution, had noted that:

“Her mother has expressed a belief in the power of spirits common in the culture of Zimbabwe … had it happened there, her daughter would have been treated by a medicine man and would have been exorcised”

“… Lorraine’s story would have befuddled few, if any, Zimbabweans”

So – here are a handful of modern perpetrators who have acted under the influence of bizarre, unprovable tenets. If you look to history, they’re not short of company: witch-hunters, inquisitors and crusaders abound. Few of them were, by the standards of the own times, mad.

It would be wrong, and in any case impossible, to legislate for anti-social supernatural beliefs. But given the potential for harm, we can reasonably stop these beliefs being monetised. The prospect of revenue creates a motivation for promotion. I suggested that payment for deliverance from witchcraft should be illegal here.

And the law already has provision for actual violence, inspired by a variety of motives, rational and irrational. Meanwhile, we are left with cases that leave us horrified … and bemused.